Urban Pioneers: Architects of The Cross

Demolition of existing structures except for the northern and western facades of No. 30-30B Darlinghurst Road and construction of a mixed use development with a scale of part-5, part-6, part-7 and part-8 storeys.

A well-attended meeting on 18 January organised by our colleagues 2011 Residents Association, slammed the  Bourbon / Les Girls Development Proposal –as a "monstrosity" which "doesn't add anything to the area. “It has no architectural merit. It's far too dense for the area. It is as ugly as sin.”

The $47 million development spans 18-32 Darlinghurst Road, encompassing the Bourbon Hotel (which was the site of the former Bourbon and Beefsteak restaurant), the Empire Hotel and the building which housed Les Girls.

The developer Sam Arnaout, and the chief executive of IRIS Capital the proponent lodged the massive DA over the Holiday season to avoid comments. He has failed as hundreds of local opponents have rallied against the monster. 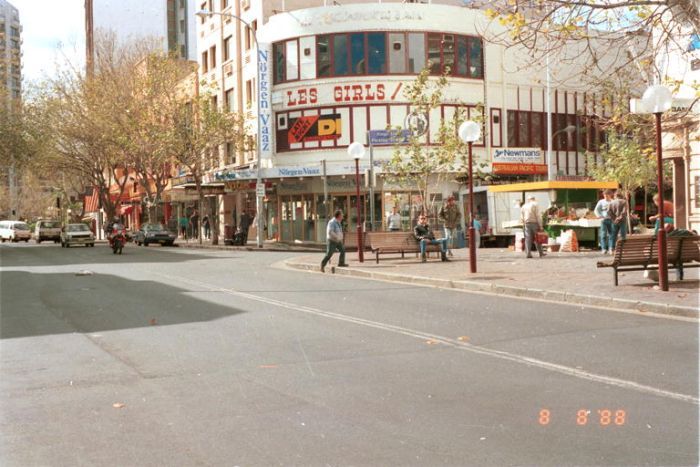 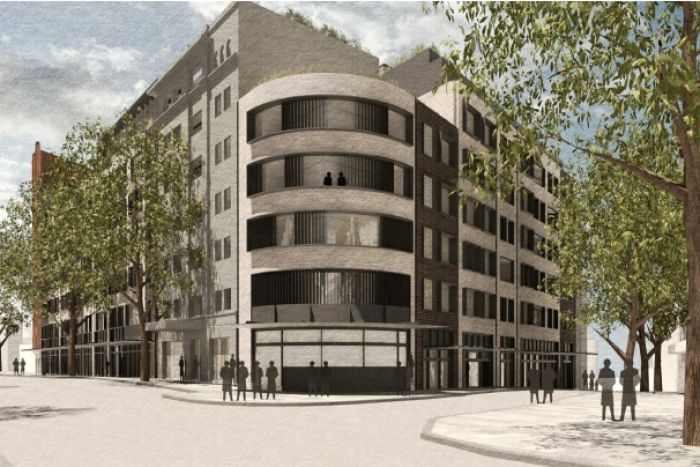 • The DA misrepresents Potts Point, claiming that it is an entertainment, retail and commercial precinct when it is also one of Australia’s most densely populated residential areas. 18-32 Darlinghurst Road is surrounded by people’s homes. And, as the NSW Government’s Office of Environment & Heritage knows, Potts Point ‘has already reached a high level of density and increased density should be discouraged’.

• The DA claims that it is providing additional retail spaces, when 66%+ of the ground floor (and over 80% of the street front) is one bar passing as two independent bars. They have a common passageway. Kings Cross doesn’t need another beer barn. The Council should prescribe mixed retail, restaurants and boutique bars.

• The DA wants to override the street’s 6 storey height limit (22m) inconsistently asserting that parts of it will be 8 and 9 storeys high. Although Kingsley Hall is 30m tall, all the other surrounding buildings are all 2, 3 & 4 storeys high. The DA repeatedly uses the undistinguished #30A to justify its height. The developer must resubmit plans for buildings which are no more than 22 metres.

• The DA does not provide floorplans, a fitout specifications or noise impact statement for the proposed bar(s). It claims that it is significantly reducing the overall bar space. But 2 floors of the present Bourbon are shells and the proposed bar will have a larger ground-level footprint. This beer barn will trade 24/7 and have gaming facilities. The architect’s drawings misrepresent the street facades, implying a row of shops when it will be one cavernous pub. The developer must revise and submit detailed drawings of this crucial space, showing multi-purpose retail usage as well as its fenestration and its acoustics strategies.

• By the developer’s own admission the common areas (Levels 1 & 5) will not get enough sunlight.

• The developer wants to retain the façade of #30A to justify his bid for a tall building. This is a ruse. His own Heritage Report does not value its architectural significance, because of its enclosed verandahs, aluminium windows and painted bricks. There is no reason to keep this building – or stick to its height.

• The developer claims that this complex will ‘help create much more of a village atmosphere with a boutique lifestyle. Where the transition is happening in parts of the area, there's a huge vacuum left in others. It's now time to fill that vacuum to contribute to its rejuvenation and to make that commercially viable, we need to build apartments and retail too’(SMH 28.12.2017). On the contrary, its scale, materials, verticality and beer barn will all disrupt ‘the village atmosphere’ and ‘boutique lifestyle’. The Council should demand more – aesthetically and socially.

Email This email address is being protected from spambots. You need JavaScript enabled to view it. for more details

I hope you will join me in opposing the proposed demolition of stately architecture at the corner of Macleay St and Darlinghurst Road (site of the Bourbon and buildings to left and right of it). Worse than the demolition of historic buildings is the proposal of a particularly cheap looking development for 83 units proposed for this high-profile site (bland at best, ugly at worst) !
See http://www.smh.com.au/nsw/smaller-bourbon-but-plenty-of-apartments-promised-in-kings-cross-overhaul-20171227-h0anir.html 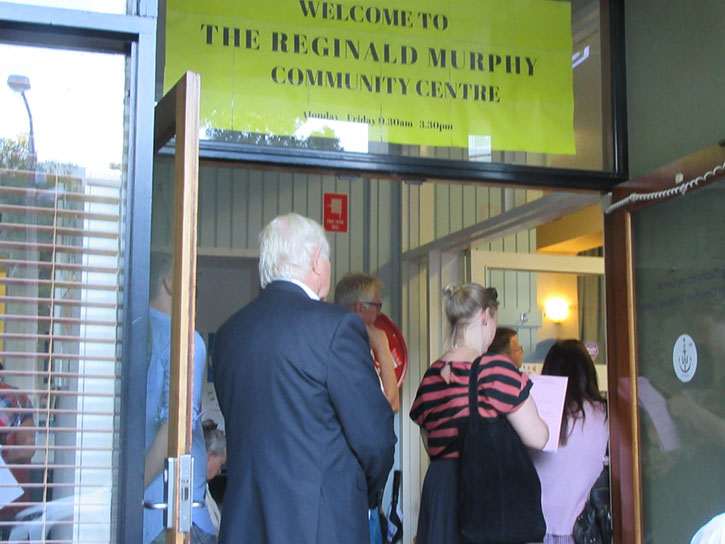 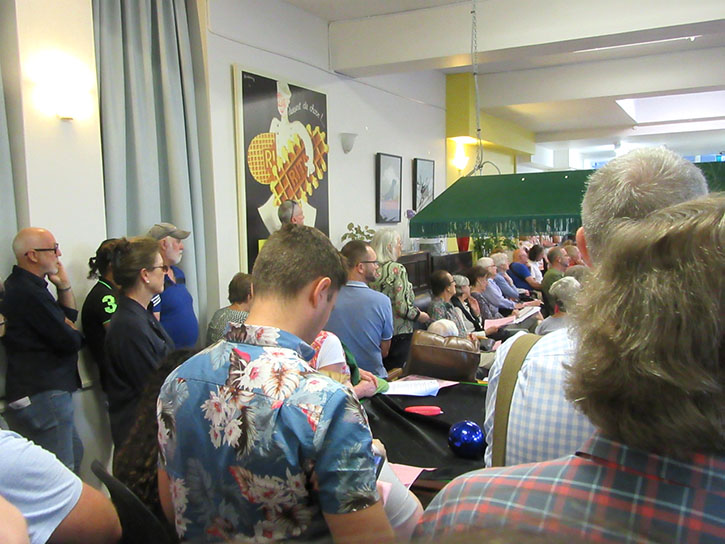 Action
Share notice of meeting and your disapproval on Facebook, Twitter, Instagram #KingsCross #PottsPoint #architecture
Write to Councillors demanding that they hear the DA in a Public Meeting in Open Council. (Submissions closed on 24 January 2018.) 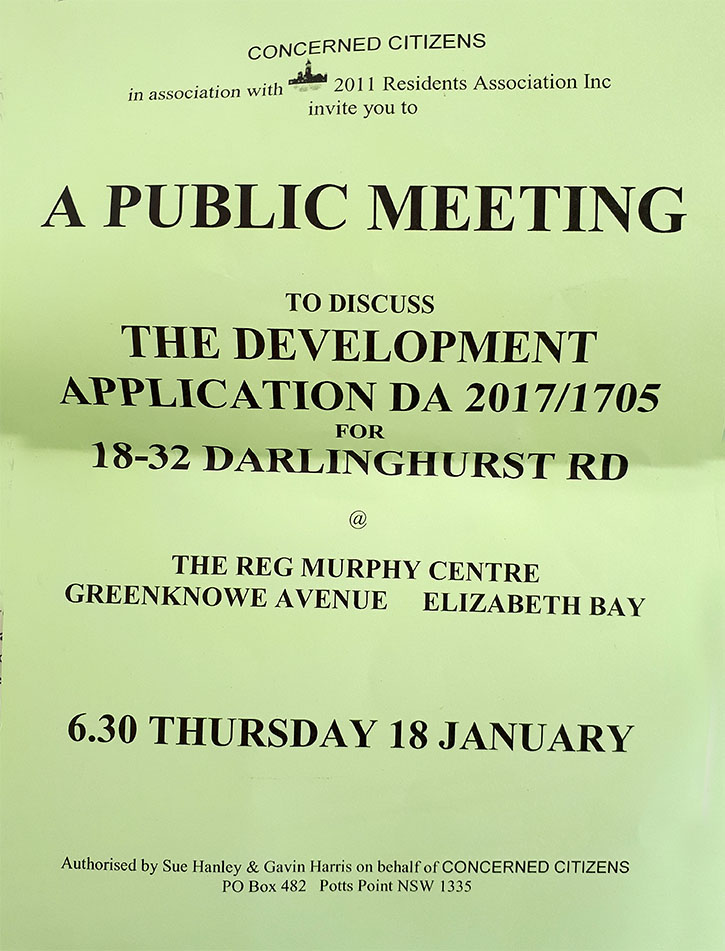 Watch videos and share videos. A Shoutout of thanks and gratitude to Paul Wagner who organised the "film production team" and worked on the edit suite with the film maker and acted as his assistant, and undertook the arduius task of uploading these videos to the 2011 Residents Association Youtube Channel in a timely manner.